Mural is a huge painting that is painted to the wall of a building. People made such kind of works of art the entire history of their existence.

Mural can be as an element of the interior or exterior. In the first case, people paint large drawings most often full-size, on the entire wall of the hall, living room, lobby of some room. In the second, murals are painted on the huge wall of the building from the front side.

Every year, a mural festival is held in Almaty, called MURAL FEST. Artists from several countries paint the facades of houses in Almaty.

This mural’s author is Ali Zakir. The idea of the work is about the environmental problem of Aral Sea, but also about the transience of time. The mural is located near the Sputnik shopping center, in Mamyr 1 microdistrict.

The “DOXA” creative team (Sergei Keller and Dmitry Petrovskii) from Kyrgystan participated in Festival of Murals in Almaty twice. First work is called “Independence”. The mural is based on the work of the photographer Said Atabekov. It is dedicated to the first astronaut from Kazakhstan. The main task that creators followed set is to erase the line between modern art and ordinary people who are far from it. The mural is located on Mamyr-2 microdistrict. Second mural, called Swallow, painted on the facade of a house near the airport. It does not have much sense, but nonetheless has become a favorite for Almaty residents. The mural reminds of spring and warm times when nature blooms.

This mural was painted by Russian artist Georgi Kurinov, more known as DOOZE. This work is very bright and saturated. He prefers to use landscapes in his works and everything related to nature and the world. Turtle is a symbol of the universe. This animal carries a symbol of life and a tree carries symbol of ecology. On the shell is written the phrase “Earth energy”, and on the tree is the eco-house of the future with solar panels and wind generators. In the middle there is a small hydroelectric power station. Mural is located in the Alatau district, in the Algabas district 1.

Andrei Palvil, a Ukranian artist prefers to draw portraits of people and birds. In this work, he combined these two segments, and managed to preserve the Asian flavor. The artist decided to devote his work to the theme of the golden eagle. In 2010 hunting with hunting birds was listed intangible cultures. The building with this charming mural located on Rozybakiyeva 1 Street.

Snow leopard on a background of mountains as a symbol of the city of Almaty. This mural was painted by artist called Neon and Shaman. The building is located on Abylay Khan 59 Avenue. Team "T1GROHAUDCR3W" Zakir (Akkali Zakirov) and Tanai (Yerzhan Tanayev) decided to mix traditional ornaments of Kazakh with street graffiti. There are constructions in front of the facade and the artists painted them together with the building. The general picture is built only when you look at it from a certain angle. 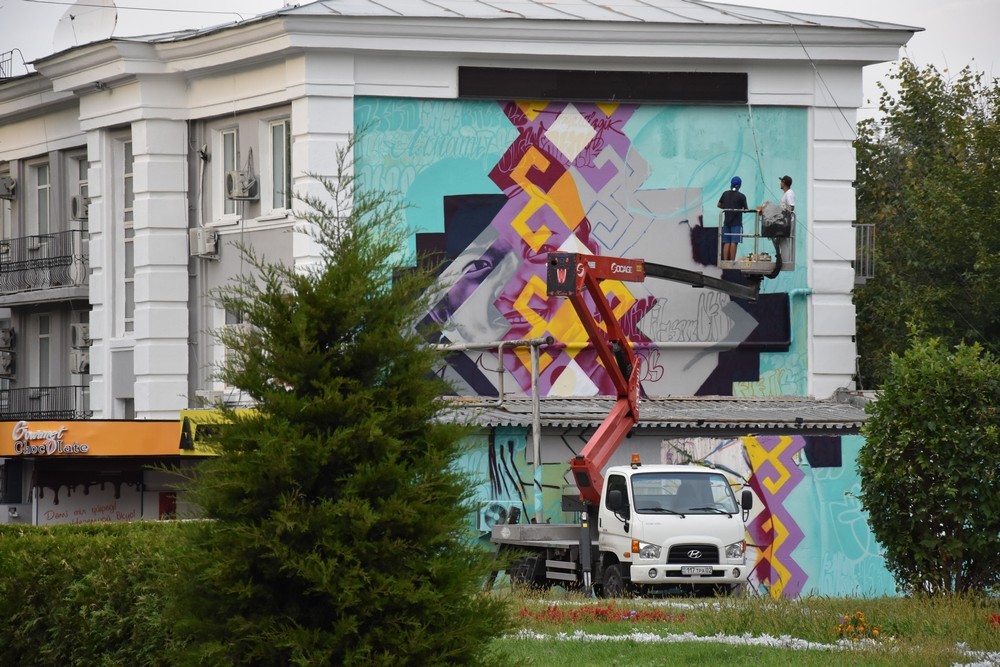 Another work of the "T1GROHAUDCR3W" team. They decided to devote their mural to the famous work of Mukagali Makatayev "Tүngi Almaty" (Night Almaty). One of the artist’s favorite techniques is calligraphy, which is why the words of the great poet reflected in his work in this style. 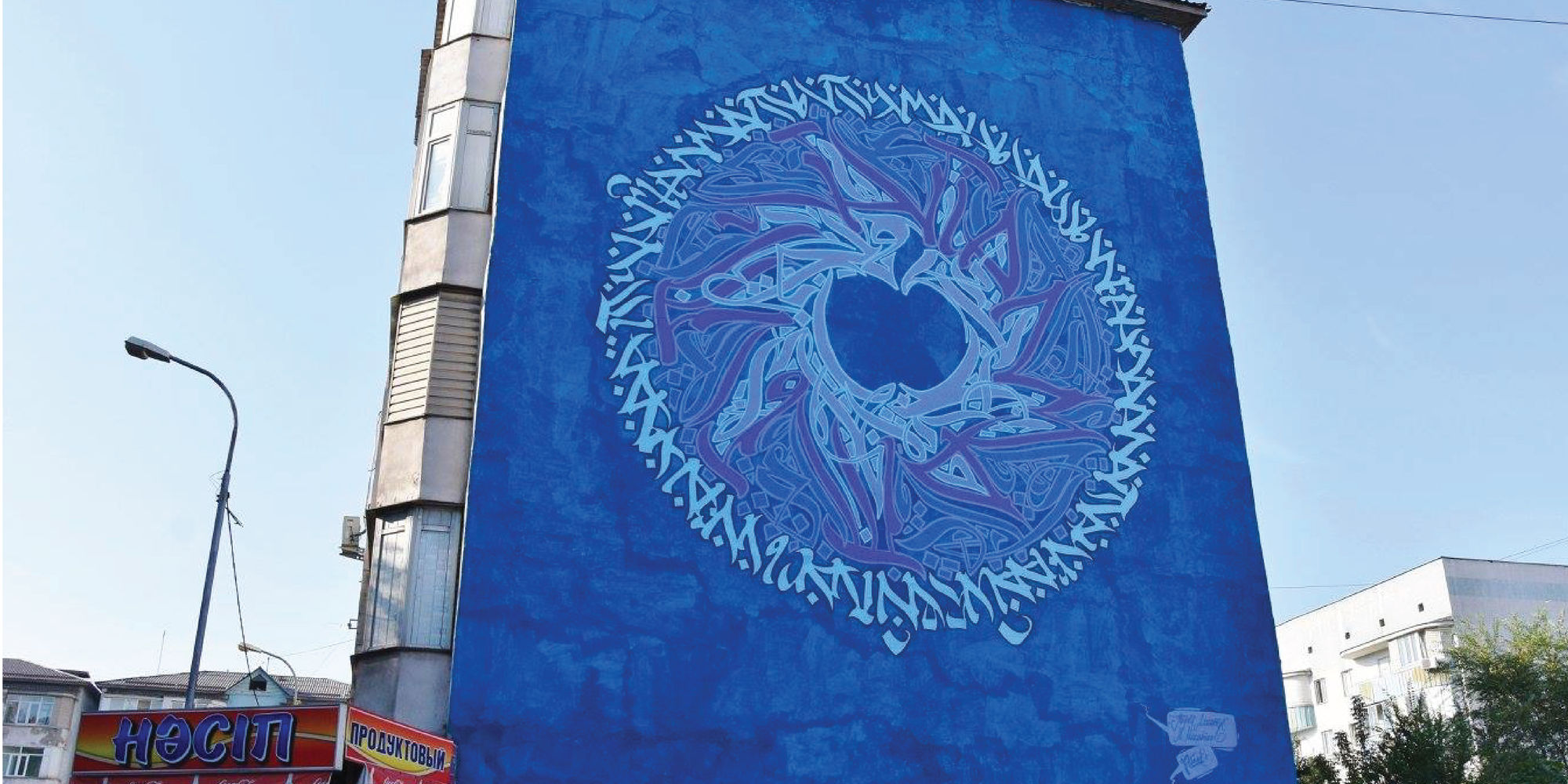 Artists from Repas team Recon (Aidar Dzhusambaev) and Rusel (Ruslan Gilyazov) pictured the works of Kazakhstani graphic artist Rasilbek Estemesov on their façade. Rasilbek has a very interesting and distinctive ethnic style. The work is a collage of many works of the artist.

Graffiti artist Dmitry DMN from the Repas team made work on the topic “Sports”. He decided to devote his pride for cycling. Which has recently very popular throughout the Kazakhstan. The inspiration for the work was sporting achievements. The mural is located on Tole Bi 127 Street.

This mural is one of the first murals drawn in 2016. The whole painting is representing Almaty. The mural was painted by Russian artist Zmogk. It is located on Kozhamkulova 2 Street.

In this work you can see the inside of the yurt, where dishes come to life and through the shanyrak you can see a beautiful night sky. This mural represents the comfort and warmth of the family hearth. The mural is made by Art Group “Good People” from Ukraine.

The author of mural Mukhit Dulu, tried to show the beauty of Kazakh women and ornaments. The image contains of a Kazakh girl in a national wedding headdress - saukele. The work is rich in national ornaments; therefore, it is especially interesting.

How to spend the perfect weekend in Aktau

Semey – The places you cannot miss

While travelling to Uralsk you won’t find large, luxury hotels, but there are some nice, cozy hotels.  There is a list of hotels...

The wine culture in Kazakhstan is not that popular as in the parts of the world. There is only one popular wine school in Nur-Sultan,...

Semey – The places you cannot miss

Semey is an old city with a rich history. Semey is located on the East of Kazakhstan between two banks of Irtysh River. Till 2007 the city...