Atameken in Nur-Sultan - Ethnography at its Finest

Explore the country in an hour? It is quite realistic if you visit the unique ethnic-memorial complex Map of Kazakhstan “Atameken”, it was created according to the project of famous designers and architects.

Kazakhstan is a huge country with endless expanses of steppes, where a wide variety of historical and natural sights are scattered far from each other. To see all the monuments, it is necessary to drive thousands of kilometers. But in Nur-Sultan you can find the Atameken ethnic-memorial complex, where all the treasures of Kazakhstan are shown in miniatures. After a trip abroad, the first president of Kazakhstan, Nursultan Nazarbayev, put forward the idea of creating this kind of park, and already in 2001, the idea became a reality. The President considered it not only interesting but also useful for tourists and local residents to create a small copy of the country's territory, which is the 9th largest in the world. The fact is that natural beauties and interesting buildings are scattered in different regions, and you need to spend months to see them all. So, the complex was built by the order of the first president of the country and opened in Astana on September 8, 2001. Such a fascinating way came here from Western countries, where it has been used for a long time. In total, there are already 17 similar complexes in the world.

Atameken from the Turkic languages stands for "Land of the Ancestors". The park is located near the circus and amusement park. A kind of open-air map is framed by a lawn and is located on a huge lawn. There are paths along which all the models of attractions are located.
The mini-map of Kazakhstan covers an area of 2 hectares, this is comparable with the area of two football fields. Here are the rice and cotton fields of Kyzylkum and ancient temples, the Pyramid of Peace and gray-haired Burabay, coal of Caraganda, Caspian oil and the boiling rivers of Alatau. Also, there is a markup of 14 regions of the republic, the location of the two main cities - Nur-Sultan and Almaty are noted. Carefully created mountains, hills, steppes, forests, lakes, and cities make up the symbolic ensemble of this cultural center.

An interesting part of the Atameken Map of Kazakhstan is a decoratively designed model of the Caspian Sea. Traveling along the tracks of the complex, which correspond to the main roads and railways of the country, you can explore the most significant sights of Kazakhstan. The map reflects nature and landscape, architecture, transport networks. By the way, the number of exhibits of the complex is already more than 200 copies, and it is constantly increasing.

The conference hall located on the territory of the complex is designed for conferences, round tables aimed at training and education of the young generation. It is equipped with an electronic map of Kazakhstan, which displays the landscape, highways, natural resources, minerals, flora and fauna of the country. Together with the Department of Education, competitions are held here on the history of the native land among schoolchildren, and the best young guides can become museum staff for the summer. So, contests for the “Best Guide” title among schoolchildren, informative conferences, round tables, forums, exhibitions, and events are regularly held in the complex with the support of state authorities. Wanna participate or become a spectator? Upcoming events can be found on the official website of Atameken - http://atamekenmap.kz/en/ Walking through the Atameken miniature park, you can feel yourself flying and exploring natural and architectural monuments. The illusion of flying over Kazakhstan is created. Kazakhstan is a country of contrasts. Here, eastern hospitality, modernity, and innovative construction are united. Modern business centers here stand side by side with ancient towns - important points of the Great Silk Road. And right in the middle of the boundless steppe rises the famous Baikonur Cosmodrome. So in the capital, Nur-Sultan, since 1997, a bizarre tower has been rising - the Baiterek monument, one of the main attractions of the country. The metal structure, as it were, is a connection between the past and the future - it symbolizes the idea of the ancient inhabitants of the steppe about cosmic distances. By the way, there is an observation deck at the top, rising to it, you will get the opportunity to enjoy panoramic views of the whole city.

In the center of the park, there is an open forum with an arena; celebrations, rallies, and other mass and entertainment events are held here. Also here are craft workshops where you can buy products of craftsmen, souvenirs from the regions of the country.
Many models were created by a group of architects and designers of the Atameken complex. They plan to develop and enlarge the map, for example, miniatures of the Palace of Independence and the Khan Shatyr were built for the anniversary of Nur-Sultan. All models are made of modern plastic for making dummies, they are moisture and heat resistant.

Guides
Without a guide, visitors find it difficult to understand the navigation of a huge visual map. Guides will tell you about the remarkable places of each of the regions of Kazakhstan, dwelling in detail on the most famous and fascinating objects, logically building a route along a chain of attractions.
During the tour, you must follow the rules: you can not touch the models with your hands, smoke, litter, drink alcoholic beverages. Walking is permitted only on paths.
You can take a guided tour for an additional fee
Excursion in the Kazakh language — 50 cents
Excursion in Russian — 50 cents
Tour in English — 1,5$
Photography — 80 cents 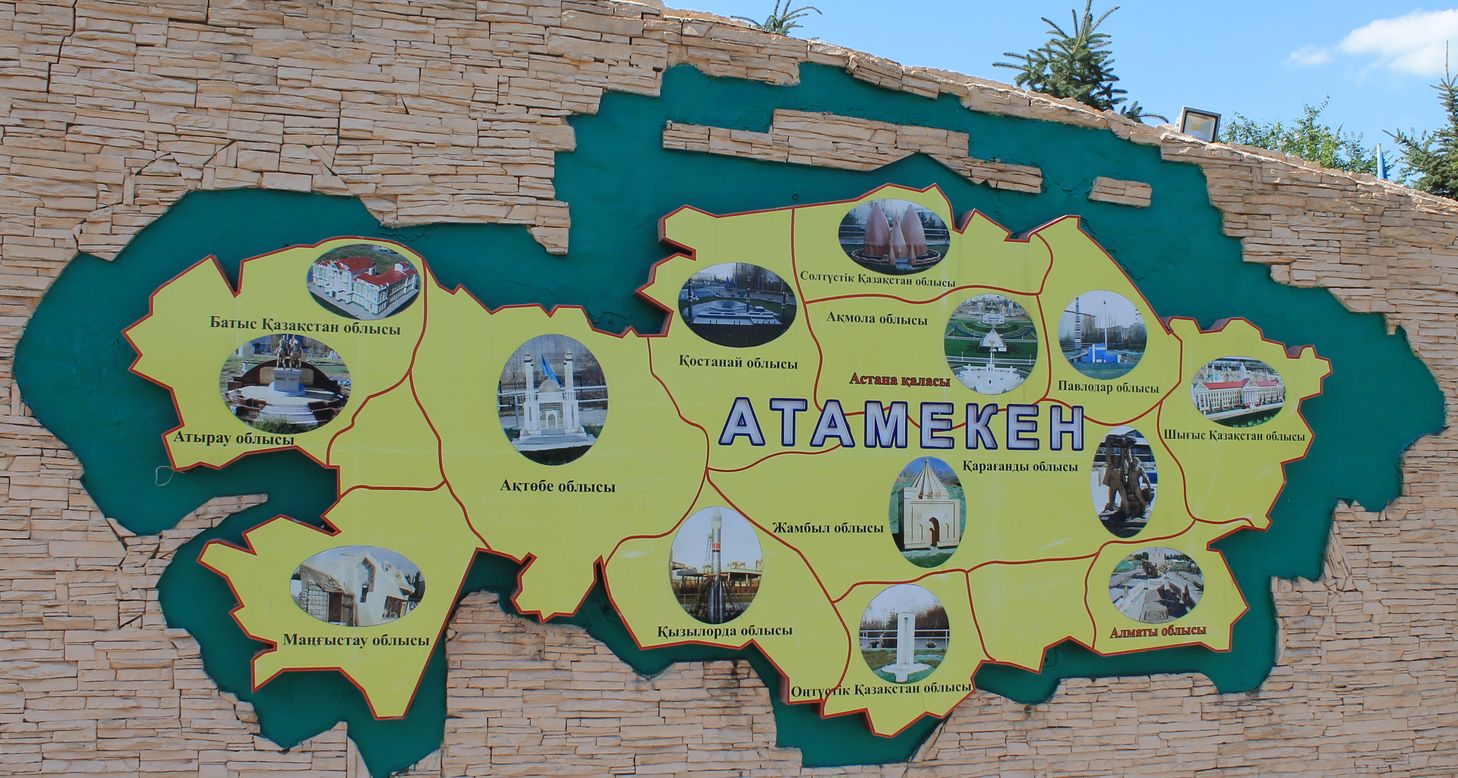 How to get there
Unlike many Astana sights located in the city center, Atameken is located on the outskirts of the capital. You can get here as part of an excursion group, by bus or by car. You can get to the park by car following the signs, having left on Korgalzhinsky highway.
By bus №18, №28, №32, №37, №44, №52, №70, you can get to the sights by getting off at the Saltanat Sarayy stop.
Nearby you can find another bus stop "RC Duman", which can be reached on routes  №103, №50, №44, №32, №21.
You can take a taxi from any part of the city to Atameken Park. Especially beneficial if the number of passengers is 3 or more. Order a taxi in the Uber or Yandex Taxi.

Atameken is a unique exhibition museum that looks like a miniature copy of the landscape and architectural sights of the state. Such an unusual object allows you to explore the most important places of the country in a very short period. All guests of the capital can familiarize themselves with the Atameken map of Kazakhstan, literally in a couple of hours, having received a lot of impressions. Thus, you can spend the whole day in the Atameken complex, feeling for a while as a real Gulliver.

Where to put your trash for recycling in Nur-Sultan

There are three main cities on the South region of Kazakhstan: Taraz, Shymkent and Turkestan. There is a lot of historical and beautiful...

Nowadays, climbing is becoming popular amount young generation. There are many mountains that won’t disappoint climbing...

Prices, online services and private operators, what to choose, so as not to be cheated and not...