Nur-Sultan (earlier Akmola, Akmolinsk, Tselinograd, again Akmola, Astana) is a capital of Kazakhstan since 1997. Nur-Sultan is located on a steppe plain. It can be compared with an oasis. A modern oasis in steppe.

Nur-Sultan is divided with river Yesil on left coast and right coast. Most of the modern buildings are located on the left coast, while right coast mostly consists old buildings. Here are the top 8 architectural marvels of Nur-Sultan.

Let’s start with a main tower of Nur-Sultan – Baiterek.

Baiterek in kazakh language means «tall tree». Тhe creation of the tower is related with the legend about the bird, named Samruk, that laid it’s golden egg on a big tree (Baiterek). That’s why it reminds of a tree.

So what’s in the inside of Baiterek? On the first floor there are ticket booths and exhibition space. There is observation deck inside the «golden egg» where you can see whole city. We recommend you to visit Baiterek in the afternoon. Believe, you won’t be disappointed. Nur-Sultan surrounded by red sunset is a very beautiful view. 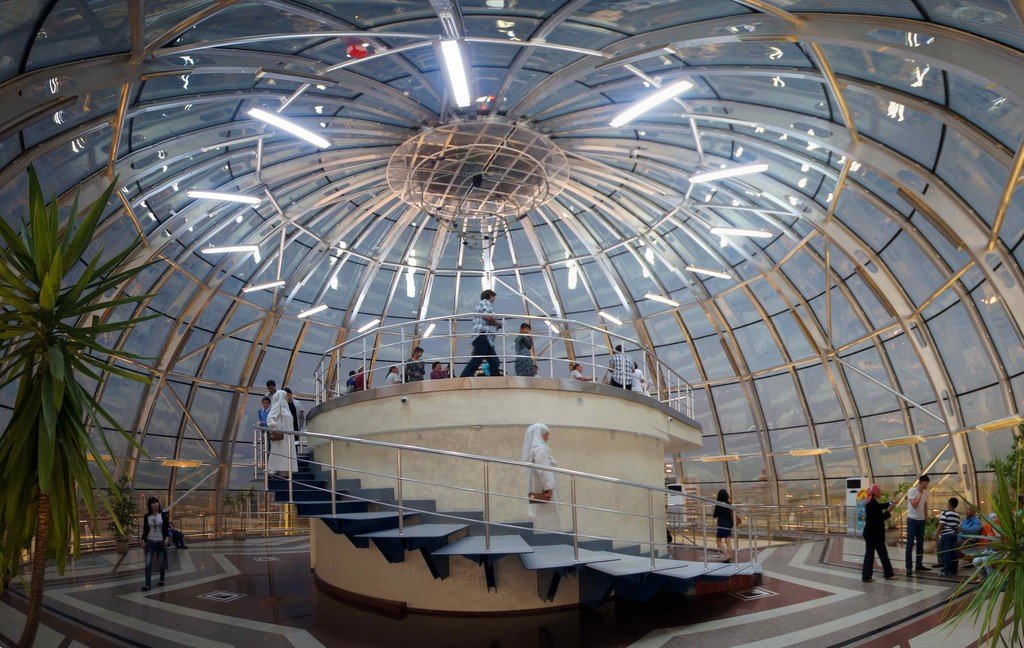 «Nur Alem» is the sphere shaped museum with a diameter of 80 meters. The Sphere is decorated with a «special» glass which is resistant to windy and cold weather of Nur-Sultan. It was built as a main building of EXPO in 2017. If you want to visit Nur Alem, please, where your comfortable shoes, because museum is large and consists of 8 levels. 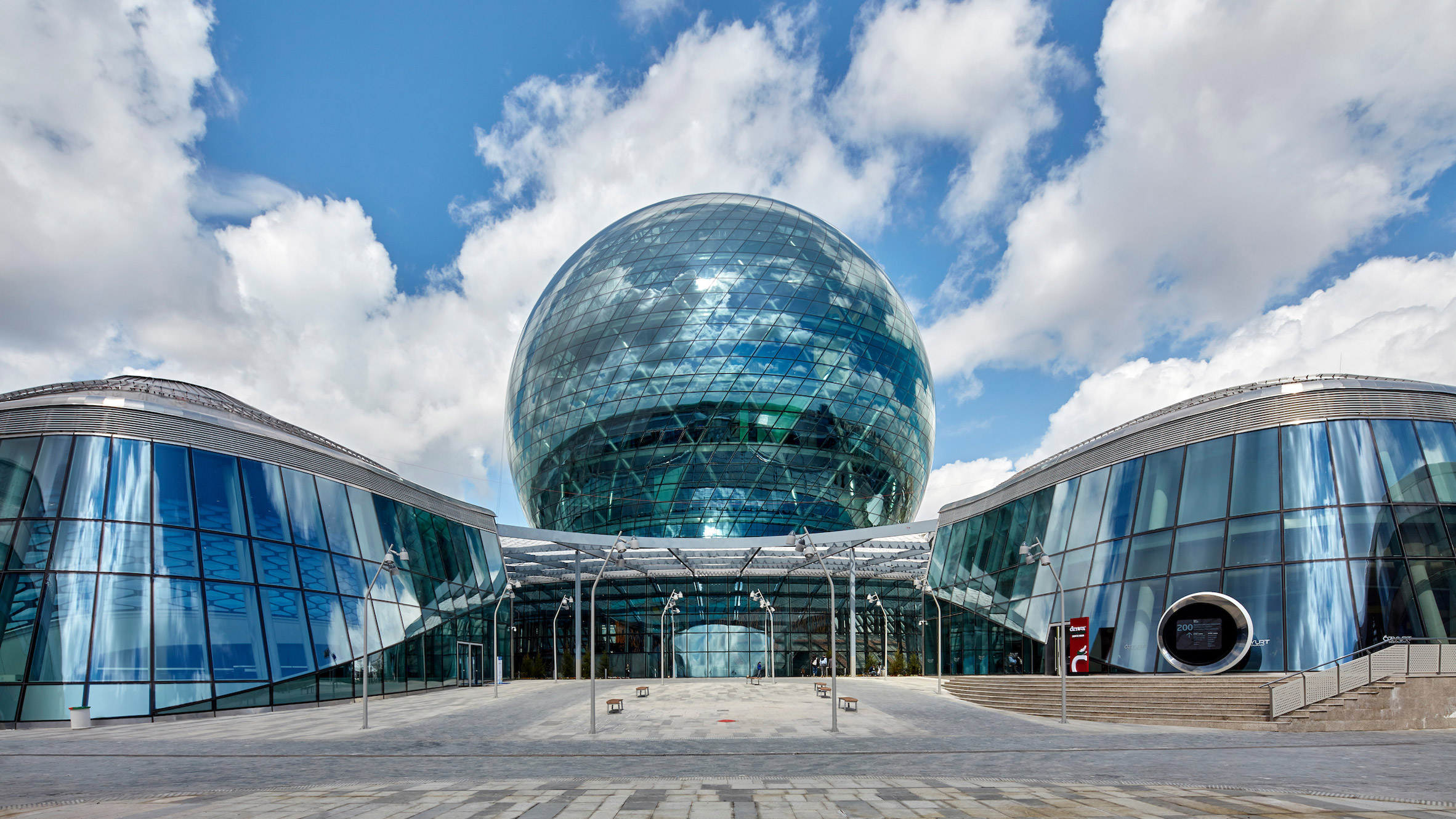 Level 8 – «The Future Astana». The visitors start their travel on the 8th level. The exhibition shows how capital city will look in 2050.

Level 7 – «The Space Energy». There are presented scientific ideas and researches about space energy.

Level 3 – «The Kinetic Energy». Visitors get to know the historical artifacts associated with kinetic energy.

Level 2 – «The Water Energy». There is exhibition about water and the ways of how it can produce the energy. 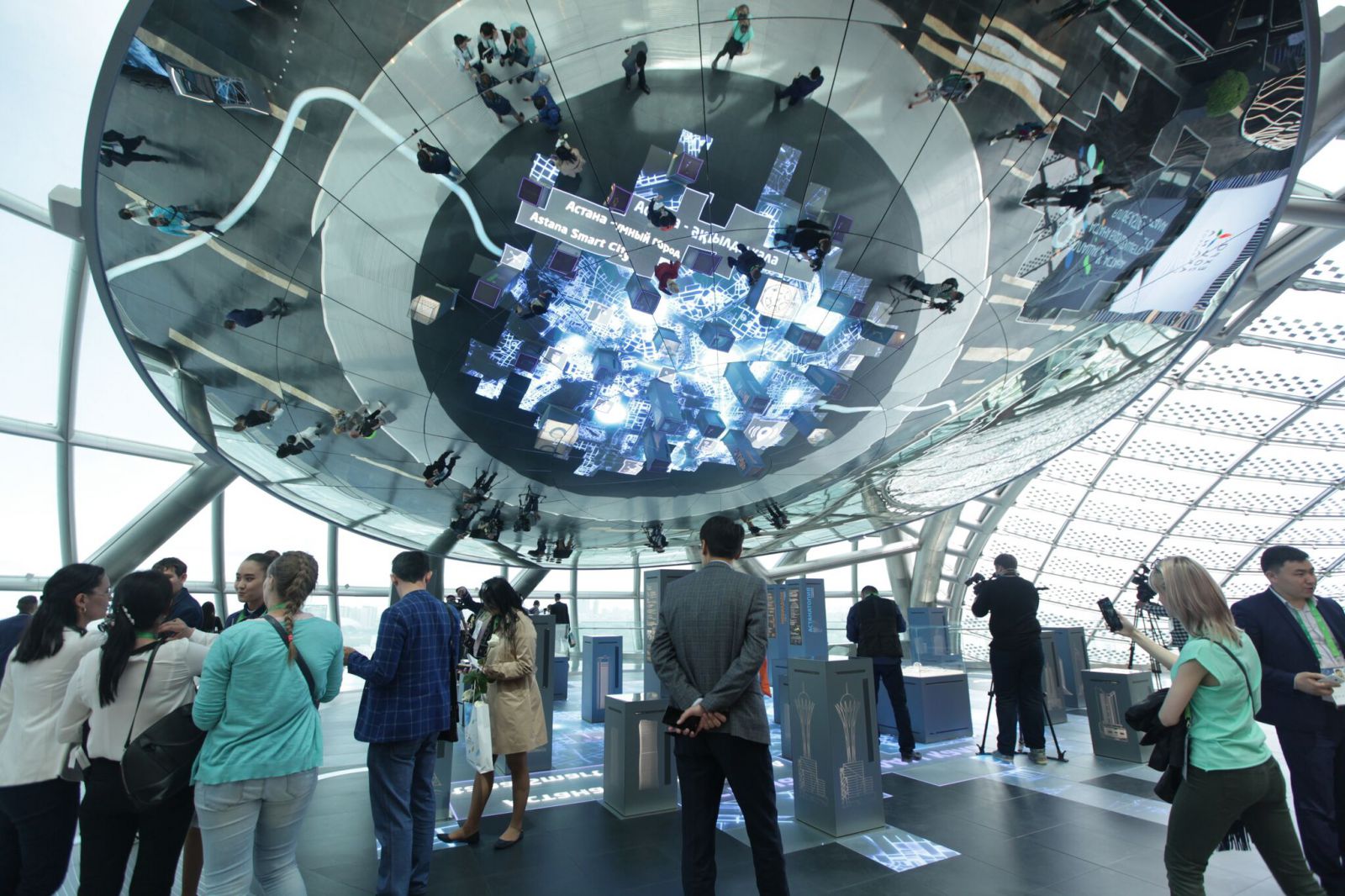 «The Pyramid», Palace of Peace and Reconciliation

The area of ​​the Pyramid is 28,000 square meters. It was built in 2006. The Pyramid is conference halls, exhibition areas, art galleries and presentation complexes. There is a glass dome on the top of the pyramid where is painted 130 pigeons. They symbolize different nations and ethnicities that live in Kazakhstan. The Pyramid is located on Tauyelsyzdyk Avenue, 57. The ticket to the museum that is located inside of the building is 1000 tenge for adults and 650 tenge for children

Also, there is a park with many different fountains around the pyramid. There you can see Ak-orda – the place of work of the President of the Republic of Kazakhstan. 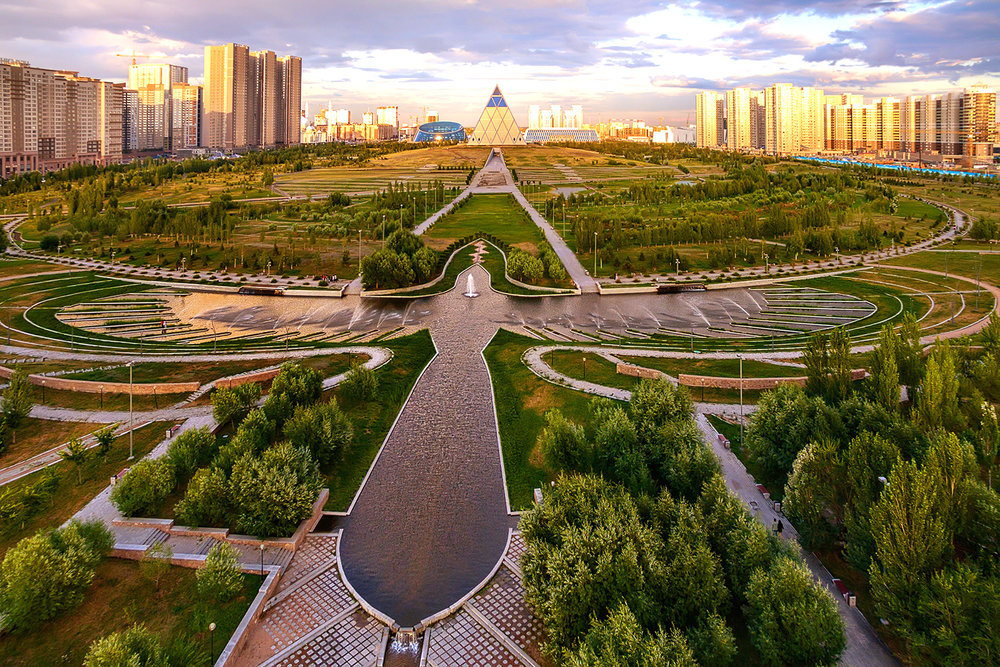 Astana Opera Theater was built in less than 3 years. The first stone was laid in 2010 and on June 21, 2013 the theater opened its first theater season. Despite that lots of buildings in Nur-Sultan looks very futuristic, Astana Opera Theater is made in classical traditional style. The interior of the theater combines Greco-Roman style and Kazakh national traditions. Also, the theater is decorated with marble, that will keep building to stand much longer. The theater has two auditoriums: the main stage for 1250 people and a chamber hall for 250 seats. You can buy tickets from a ticket booth or on the Astana Opera Theater website (astanaopera.kz). Address: Dinmukhamed Kunayev Street, 12/1. 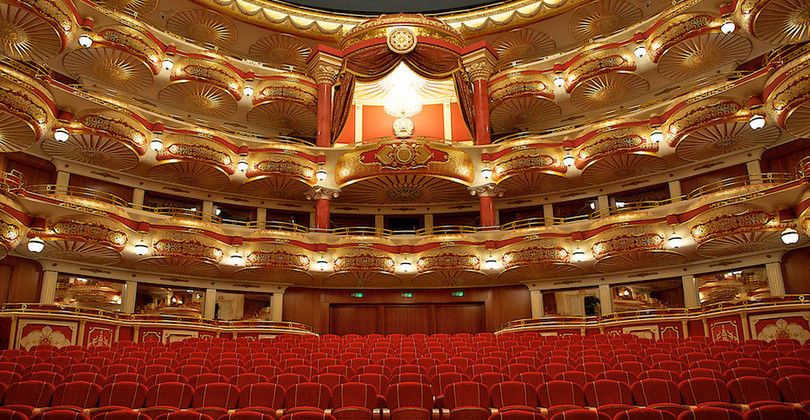 Khan-Shatyr is one of the biggest shopping and entertainment center in Nur-Sultan and the largest marquee in the world. Also, Khan-Shatyr is in the top ten of the world’s eco-buildings. The entertaing center is located on Turan Avenue, 37.

There are different shopping and entertainment facilities: brand shops, café, restaurants, playgrounds, family parks, supermarket, companies’ offices, cinema theatres and Aqua Park. By the way, the aqua park has an artificial beach, which maintains a tropical climate with temperature of 35°C for a whole year. 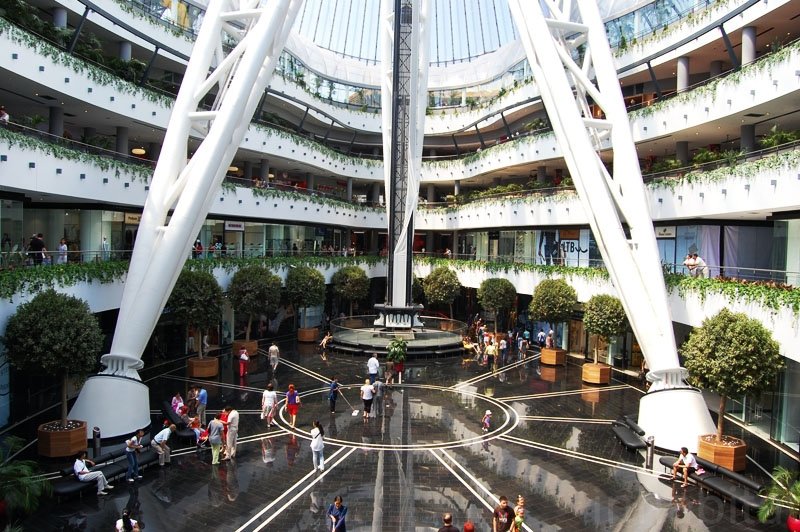 On the -1 floor there are supermarkets, drugstores, electronic stores. If you want to buy brand clothes you should see 1st and 2nd floors. They include brand stores and boutiques. Also, there is movie theater on the 2nd floor. Food court is located on the 3rd floor. 4th floor has entertaining center and Aqua Park is on the 5th floor.

A pedestrian and cycling bridge was opened in July 1, 2018. The bridge is a gift from the Akimat of Atyrau Region for the 20th anniversary of Nur-Sultan. The bridge connects the right coast with the left coast. People call it «fish» bridge, because it resembles of fish – the symbol of Atyrau Region. The length of bridge is 313.5 meters. 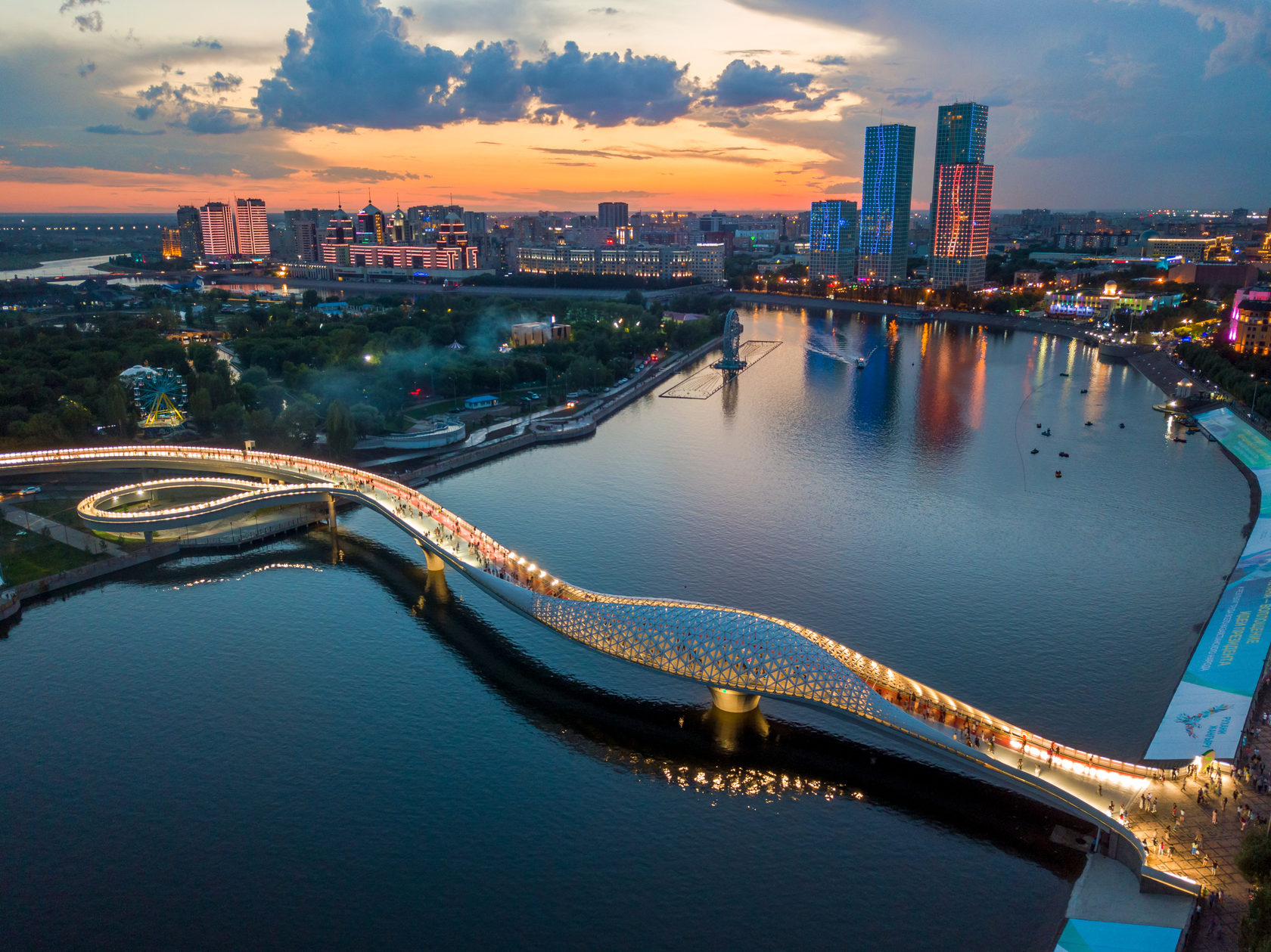 The bridge is connecting embankment and central park. This places are very popular among young people. Especially, at the summer time. So, if you want to take a walk or ride a bicycle and enjoy a beautiful view, we would recommend you to go from embankment to the central park through the bridge.

The Hazrat Sultan Mosque is the largest mosque in Central Asia. It is able to house up 10,000 people. The mosque has rooms for Koran reading, rooms for having lessons, hall for wedding ceremonies, cloakroom and an ablution room. The main dome of a mosque is surrounded by 8 smaller domes and 4 minarets (towers), 77 meters each. 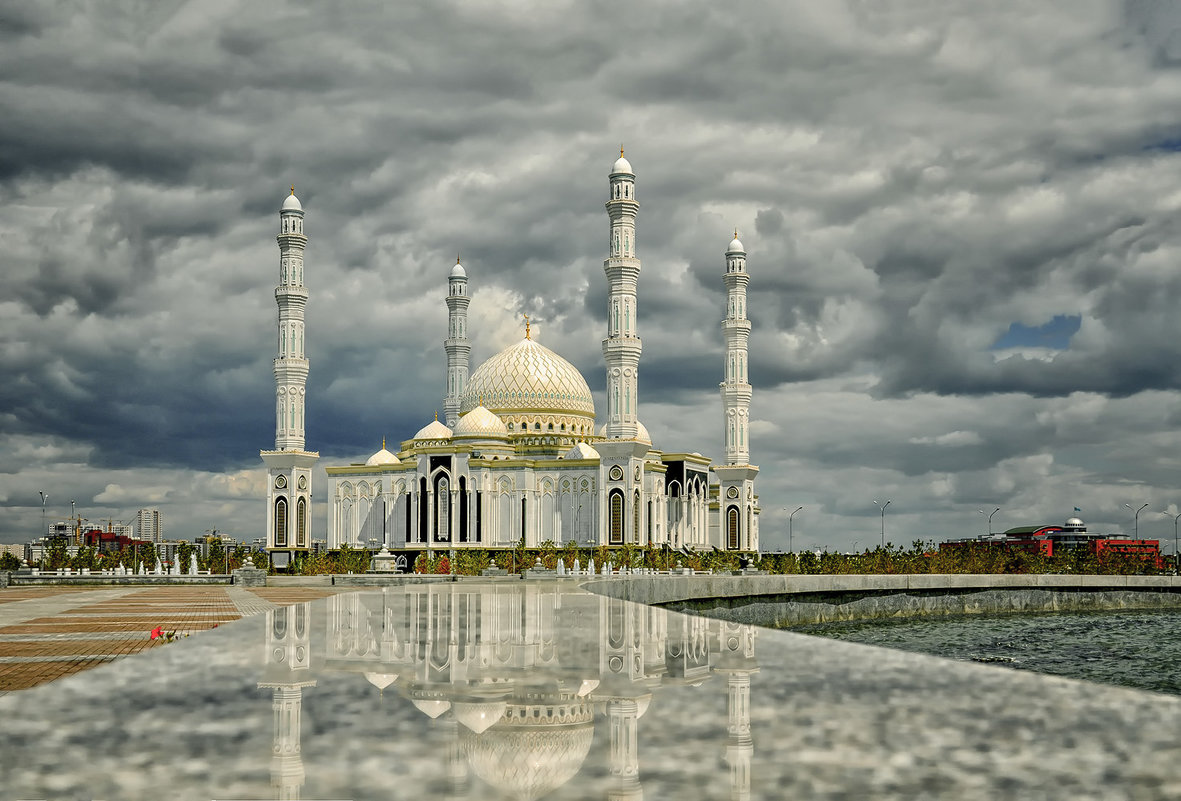 The mosque was named after Khoja Ahmed Yassawi. It was constructed in Islamic style combined with Kazakh traditional ornament. Interior and exterior are mostly designed with white color. Tourists are allowed to visit mosque and take photos there.

It is located on Tauyelsyzdyk Street, 37. The mosque is located near to The Pyramid, National Museum and Kazakh Eli Monument.

Ak Orda is the president’s work place, it is not the residence of the president. It is located on the left coast of the Yesil river and was built in 2004. The building designed with white, blue and golden colors. There are Grand Central Hall, the Gala Hall, the Winter Garden and the Hall of Press Conferences on the first floor. Offices of the President Administration workers on the second floor. The third floor has Marble Hall, Oval Hall, Oriental Hall, Golden Hall and the Hall of Extended Negotiations. The fourth floor includes a Dome Hall, a Library and meeting hall for the Government of the Republic.

A statue on the dome has a sun with 32 rays and eagle flying under the sun. This image is the same as on the flag of Republic of Kazakhstan. 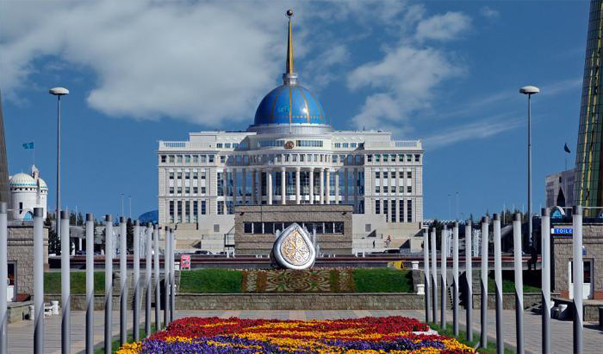 Also, we would recommend you to take a walk along the Nurzhol boulevard. It runs from Ak Orda to the entertaining center Khan-Shatyr. The lengths of the boulevard - 2200 meters. Along the boulevard there are many breathtaking, beautiful, futuristic buildings.

Where to Ride Horses Around Nur-Sultan

Kazakhstan is a big country, where more than 125 nationalities live together in peace and harmony. In large cities, you can find...

The term eating habits (or food habits) refers to why and how people eat, which foods they eat, where they buy food Hospitality is the...

There are a lot of shopping malls in Kazakhstan that you can visit and spend your time to buy...